Summary (*available in French on request)

This conference will explore the history of a medium that has occupied a pivotal role in Mesopotamian, Greek, Roman and Judeo-Christian religious tradition: incense. According to Margaret E. Kenna in her provocative 2005 article ‘Why does incense smell religious?’, this aromatic substance became a diagnostic feature of Greek orthodoxy during the Byzantine period, but it is clear that incense was also extensively used in the rituals of earlier polytheistic societies to honour the gods. Fragrant smoke drifting up towards the heavens emblematized the communication that was established between the mortal and the immortal realms, which in turn contributed to the sensory landscape of the sanctuary.

Although several studies have drawn attention to the role of incense as an ingredient in ritual and a means of communication between men and gods, there remains no comprehensive examination of the practical functions and cultural semantics of incense in the ancient world, whether as a purifying agent, a performative sign of a transcendent world, an olfactory signal to summon the deity, a placatory libation, or food for the gods. Moreover, recent archaeological research has provided evidence (alongside literary, epigraphic and iconographic evidence) that the physical origins and chemical constituents of incense are complex and diverse, as are their properties: resins, vegetable gums, spices, and a welter of aromatic products that could be exhibited and burned before ancient eyes and noses. These were components of a multi-sensory religious experience in which music, colourful costumes, lavish banquets and tactile encounters defined the ritual sensibilities of the community.

During the two days of the conference, incense will be interrogated as a historical phenomenon. We will explore its materiality, provenance and production, as well as the economic and commercial aspects of the incense trade. The conference will also examine the mechanics of incense use and the various ways it was integrated into various Mediterranean rituals (following the lines of enquiry set out by N. Massar and D. Frère), as well as its role within religious topography. The properties associated with the term ‘incense’ will be evaluated in the context of work by M. Detienne on The Gardens of Adonis (1989): what components of incense make them effective and potent within ritual? And what mechanisms and processes are used to release their aromas? And what was the perception of incense by the various participants of the ritual – deities, priests, assistants, spectators? These research questions will be informed by the recent research synergies of the organisers: M. Bradley, whose edited volume Smell and the Ancient Senses (Routledge, 2015) probes ‘foul’ and ‘fragrant’ odours as part of both human and divine social relations; A. Grand-Clément and A.-C. Rendu-Loisel, who lead the Toulouse research project on Synaesthesia that is dedicated to the interdisciplinary and comparative study of polysensoriality in ancient religious practice; and A. Vincent, who is engaged in the study of sensory perception in Roman ritual in his work on the Soundscapes (Paysages sonores).

This conference sets out to compare approaches across a range of disciplines in order to examine the role and significance of incense in ancient religion, and compare it to later aromatic practices within the Catholic Church. By adopting this cross-disciplinary and comparative approach, we hope to move beyond a universalist approach to religious aromatics and reach a more sophisticated understanding of the religious function of incense in the Mediterranean world: we hope to identify continuities in both the practice and interpretation of incense, as well as to identify specific features within individual historical contexts and traditions.

Although the conference is principally concerned with the use of incense in antiquity, we also welcome contributions from Byzantine and Medieval scholars, as well as church historians, to help provide a comparative perspective on the use and significance of incense within the Mediterranean world. We also hope to use the conference’s setting in Rome to examine current practice in the use of incense and aromatics in Roman Catholic contexts and other religious traditions. The conference will also provide an opportunity to examine first-hand the material properties of incense through a practical workshop around incense-production and burning (co-ordinated by A. Declercq, one of the scientific researchers on the Synaesthesia project at Toulouse), which will allow participants to handle a range of aromatic products and experience their various multi-sensory properties. The outcome of this workshop will be presented as the Musée Saint-Raymond at Toulouse in November 2017, as part of an exhibition on ‘Greek rituals: a sensible experience’, currently in preparation.

It is hoped that this conference will be of interest to scholars working in archaeology, anthropology, cultural history, literature, art history, and the history of religion, as well as local artists and members of the public. Papers should last approximately 20 minutes, and may be in English, Italian or French; they should be original and should not have been previously published or delivered at a major conference.

Paper topics might include, but are certainly not limited to, the following themes related to incense:

Abstracts of approximately 200-300 words should be submitted by 31 October 2016 to Mark Bradley (mark.bradley@nottingham.ac.uk) or Adeline Grand-Clément (adelinegc@yahoo.fr). Successful contributions may be considered for publication in a conference volume.

This conference has been funded with generous support from the École française de Rome, the British School at Rome, the Institut Universitaire de France and the IDEX of the University of Toulouse. 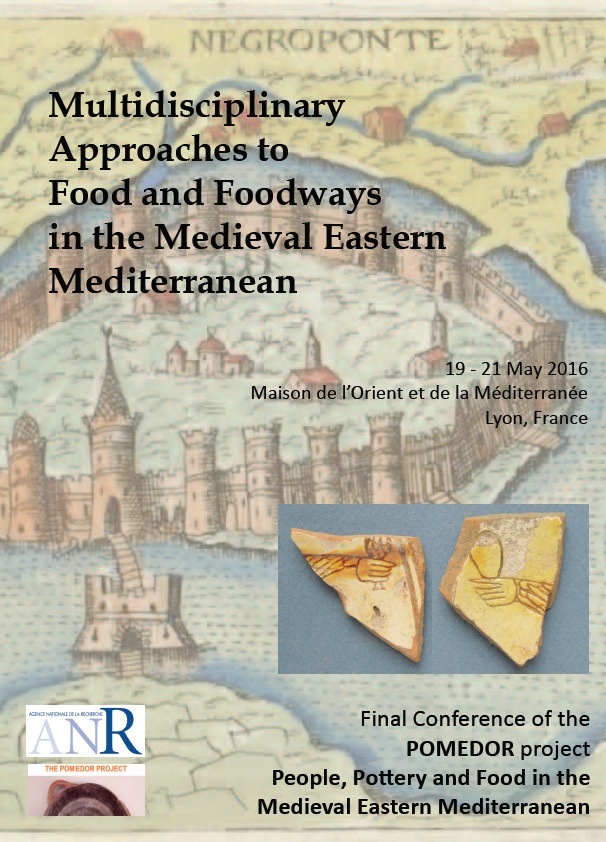 Multidisciplinary Approaches to Food and Foodways in the Medieval Eastern Mediterranean

Final conference for the POMEDOR Project « People, Pottery and Food in the Medieval Eastern Mediterranean ».

Information and registration before May 1st.

CYPRUS AND THE LEVANT
11h00 “Population Change in the Southern Levant as Reflected in Ceramic Production and
Consumption from the Fatimid to the Crusader Periods” – E.J. Stern (Israel Antiquities Authority),
A. Shapiro (Israel Antiquities Authority), S.Y. Waksman (CNRS Lyon)
11h30 “Food and Holy War: the Role of Food in the Crusaders’ Conduct of War and in their
Encounter with the New Land and its Inhabitants” – J. Bronstein (Haifa University)
12h00 “Eating and Drinking at Medieval Kinet” – S. Redford (University of London), C. Çakırlar
(Groningen University)
12h30 Discussion
12h45 Lunch Break

Byzantine Banquet Created by S. Grainger, A. Dalby and I. Anagnostakis
Paul Bocuse Institute, Ecully
Under the Patronage of Chef Régis Marcon
FRIDAY 20 MAY

11h15 “Freightage of Amphorae, Tableware and Foodstuffs in the Middle and Late Byzantine Period: the
Evidence of Shipwrecks” – G. Koutsouflakis (Ephorate of Underwater Antiquities, Athens)
11h45 “Production for Whom and for What Target: Thoughts on a Group of Wine Containers from the
Kuşadası, Kadıkalesi Excavation” – Z. Mercangöz (Ege University Izmir)
12h15 “Food Habits and Tableware in Venice: the Connections with the Mamluk Sultanate” – V. Vezzoli (Ca’
Foscari University, Venice)
12h45 Discussion
13h00 Lunch Break

Spanning more than a millennium in time, ranging from the Atlantic to Iran, and including a vast array of polities, social groups, and cultural moments, the Late Antique and Byzantine world is, if nothing else, complicated and varied. Despite Gibbon’s famous attempt to reduce it to a single trend, the Late Antique and Byzantine world refuses to be simplified.

Please send an abstract of no more than 250 words, along with a short academic biography in the third person, to the Oxford University Byzantine Society at byzantine.society@gmail.com by Friday, 27th November 2015. Papers should be 20 minutes in length, and should be delivered in English or French.

As with our previous conferences, there will be a publication of selected on-theme and inter-related papers, chosen and reviewed by specialist readers from the University of Oxford’s Late Antique and Byzantine Studies research centres. Any speakers wishing to have their papers considered for publication should try to be as on-theme as possible in their abstract and paper. Nevertheless, all submissions are warmly invited.

Further information will be made available on the appropriate page of the OUBS website.